Please click here to check out our April 2020 newsletter! 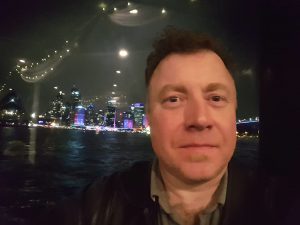 My name is Adrian and I was hit by a car on October 28, 1987- 2 days before my 14th birthday. I was knocked off my bike and landed on the road head first.

I woke up after being unconscious for 4 weeks. I suffered Acquired Brain Injury- unable to walk, talk and very minimal use of the left side of my body.

Doctor said that I will slowly improve over the next 2 years, but talking will be the last to improve. I was determined to prove him wrong, so I started talking after a month. It took me 6 months to be able to get out of my wheelchair and then another 6 months to walk unaided (albeit slowly!).

After 1 year, I went back to school part-time. I traveled from school to hospital appointments daily. It was difficult for me, as I had to deal with the pressures of school and rehabilitation concurrently, but I managed to adapt, grow and continue through and pass year 12.

After school I worked for a while selling lollies door to door (where I ended up eating half my profits!), until I got a job working at a clothing wholesaler in Carlton. And I’m still here 26 years later.

I’ve had many adventures along the way- many times I fell over and had to pick myself up (both metaphorically and physically!).

Please click here to check out our December 2019 newsletter!

Please click here to check out our June 2019 newsletter!

Please click here to check out our December 2018 newsletter! Although I had visited camp in 2016, as part of a research study being undertaken with Heads Together and Monash University looking at the experience of a recreational camp for families with a child or young person with acquired brain injury, my first ‘real’ camp was in May 2017 as a family volunteer.

It was a weekend which blew me away. I got to know my volunteer family and spend time with them. I met other families. I met other volunteers. We talked, played games that made us laugh, and danced at the disco. I was touched to hear people share stories and experiences at the Fire of Friendship, but it was Magic Moments which really moved me. I thought that as I was a new volunteer, I wouldn’t really be in people’s minds. But for each statement read out, I felt a hand touch me and I realised that in some way people remembered me.

What do I get out of volunteering? As a neuropsychology student and researcher, being at camp gives a human story to ABI and reminds me to keep that story foremost in my mind and in my work. As a person, volunteering at camp reminds me to face challenges head on – and always try to see the sunny side of things. Thank you for the opportunity to join the Heads Together community. I look forward to many more camps!

Please click here to check out our June 2018 newsletter!

Please click here to check out our February 2018 newsletter!

This morning the ABILiTy Team kicked off their fir

This month we are excited to be presenting our ver

We have some amazing programs coming up this year,

Please go to our website and register your interes

Wishing everyone a safe and fabulous festive seaso

Our wonderful friends at the Stroke Foundation are

The final session of our Reach the Teacher series

Thank you to the Barr Family Foundation We're so

We know family and friends play a key role in supp

Friday International Day of People with a Disabili

Heads Together is so proud and excited to be part